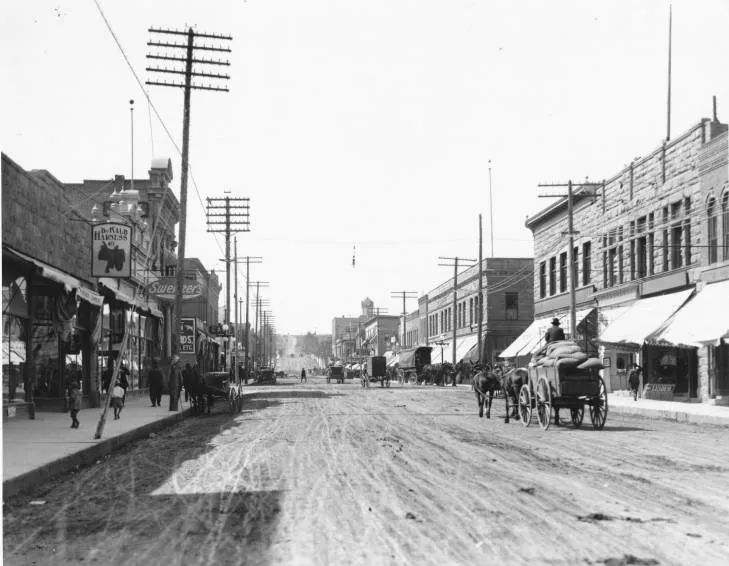 Power Mercantile Company was established in Lewistown in 1883 after Francis Janeaux, who conducted a merchandising establishment in the small settlement, became indebted to his supplier T.C. Power and Brothers of Fort Benton. Janeaux, who platted a portion of his homestead for the original townsite, lost his buildings, merchandise, and some lots to cover the $5096 debt.

The well-established Power Mercantile Company moved to their new stone facility in 1901. The building, typical of the early permanent masonry structures in Lewistown, is hand-cut coursed sandstone. In 1908 Power Mercantile expanded with a stone warehouse building facing Broadway Street in the same block. In 1913 Link and Haire designed a two-story addition to match the main building. The addition, designed to carry an unconstructed four-story superstructure, gave the Mercantile the entire block on Third Avenue, closing the alley and connecting with the warehouse building. Later occupants have been Vaughn and Ragsdale, Reids, and other small retail shops. 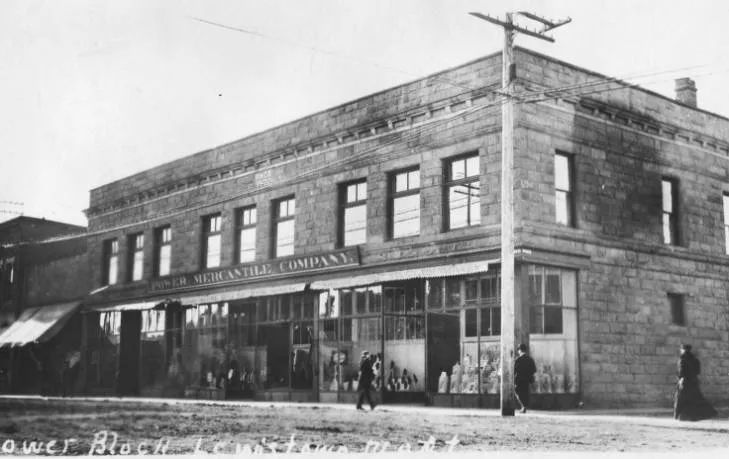 T.R. Carson opened Carson’s Saloon in 1893, and the building remained a saloon until 1908 when Charles Williams opened the “Bon-Ton Confectionery.”

The building is one of the oldest structures on Main Street. The vernacular sandstone structure exhibits an early renovation of a brick façade, and a mid-20th century ground floor storefront of metal pan tiles. 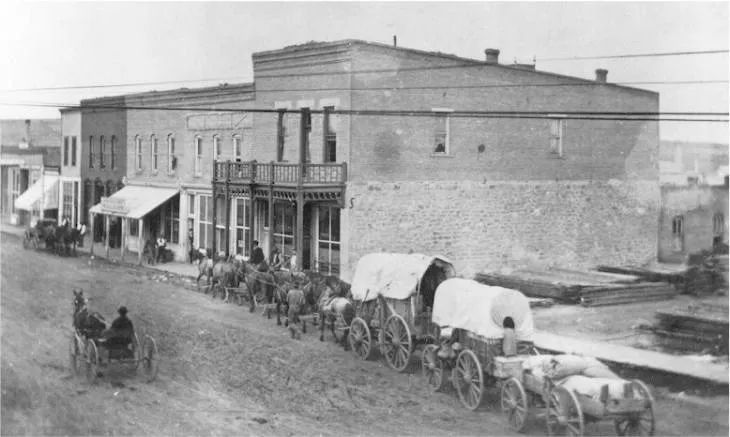 The 1913 Public Buildings Act prohibited the construction of new post office buildings in communicates who postal receipts totaled less than $10,000, and for years efforts to secure a government-owned post office were unsuccessful. Chauncey R. Fowler because postmaster in July 1926, and with the help of Congressman Scott Leavitt and a delegation of local business and civic leaders, ultimately succeeded in gaining appropriations needed for the building. McGough Brothers of St. Paul began construction on March 1, 1929.

J.A. Wetmore was supervising architect for the building, which was designed to carry an additional two stories. An elevator shaft, steam, water, and column connections are in place for the planned, but never built, expansion. The new post office opened for business December 1, 1931. 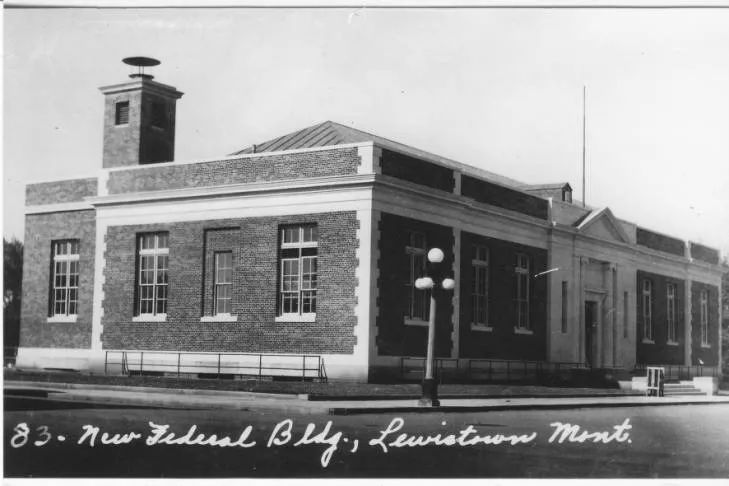 Otto Wasmansdorff and George Eastman designed the Masonic Temple. Wasmansdorff was Worshipful Master of Lewistown Lodge #37 AF and AM and, no doubt, was largely responsible for seeing the design of the building conformed to the teachings and tenets of the lodge.

The Masonic Lodge is constructed of native sandstone and exhibits the craftsmanship of the highly skilled Croatian stonemasons, who immigrated from Bribir and arrived in Lewistown as early as 1897. The most intricate part of the building’s façade was ornamental stone cutting done by six men: the contractor Peter Tuss, Pete Drezick, George Drezick, George Ligatich, Vincent Kalafatic, and John Plovanic. The Masonic Temple remains a symbol of the brilliant craft technique of the Croatian masons and the growth of Lewistown. 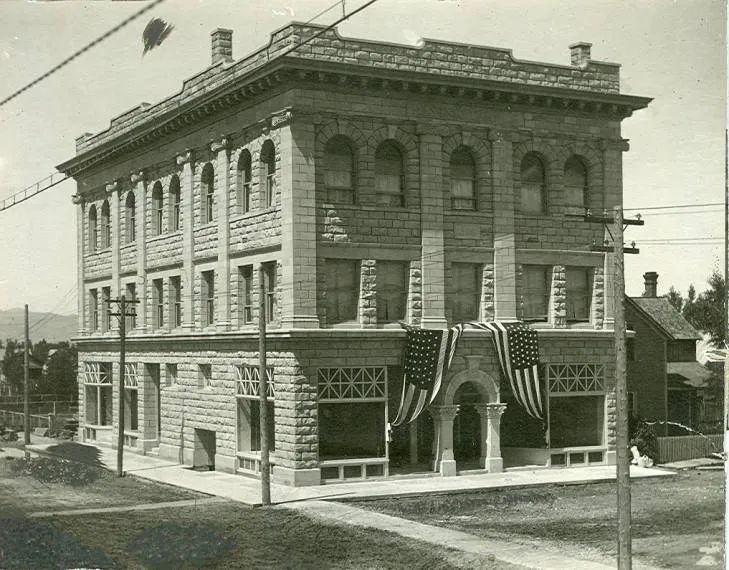 H.H. Lang was superintendent of the Kendall Mine, one of the most productive gold mines in Central Montana. Investment property in the growing Lewistown area was nearly as lucrative. The H.H. Lang Block stands as a visible sing of the development and prosper of Lewistown in 1904.

The two-story stone building is a fine example of the stone masonry building tradition that characterizes the early architecture of Lewistown. It originally housed the Fergus County Hardware Company, the Fad Shoe and Clothing Company, and the second floor served as the Mason’s Lodge before construction of the Masonic Temple. 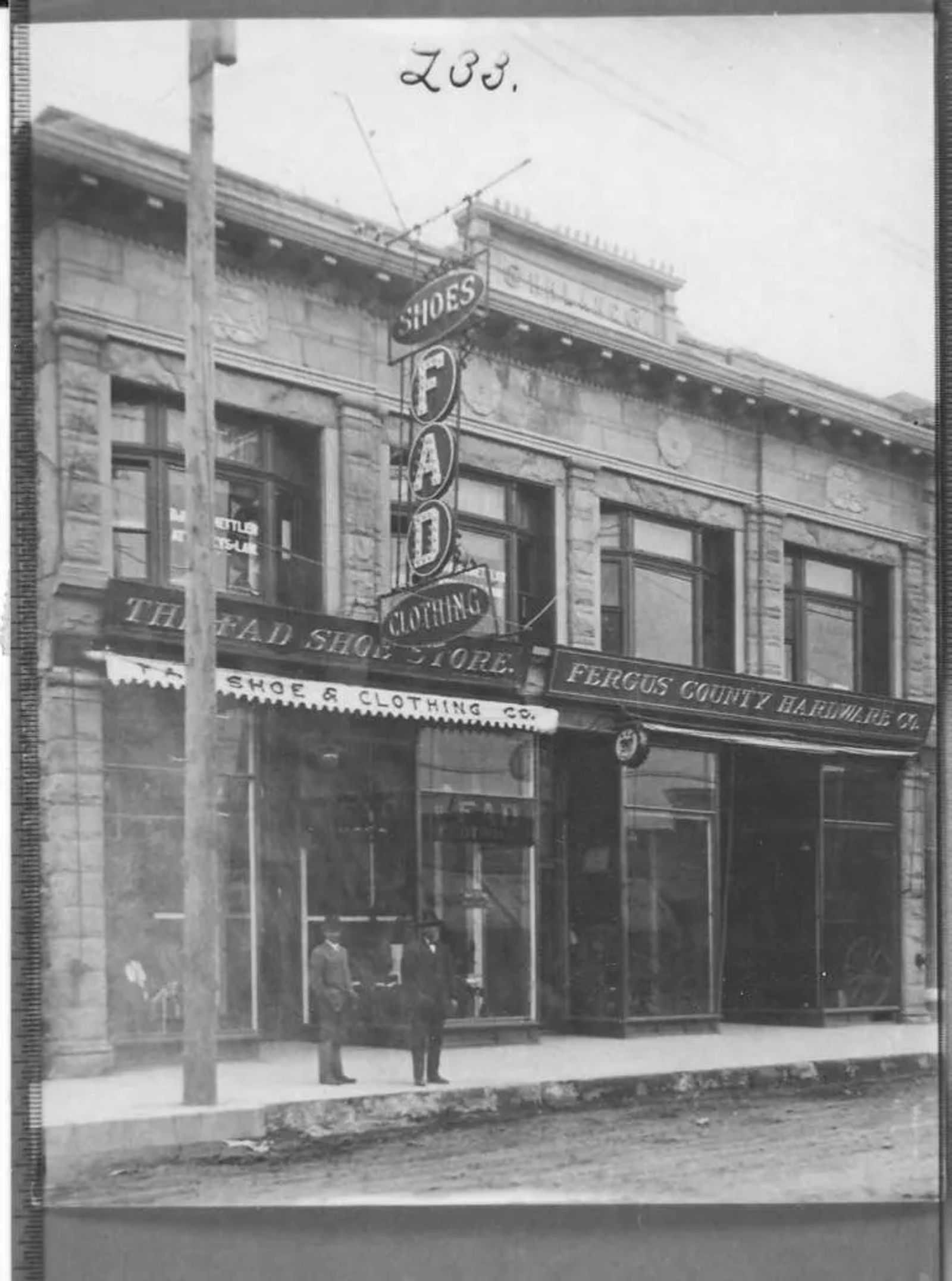 The Lewistown State Bank first opened for business in November 1910. Officers of the bank were: A.W. Stoddard, President; C.E. McKoin, Vice President; C.E. Copeland, Cashier; and P.P. Halpin, teller. Directors included John Brooks, V.F. Dusek, and Edward McDonnell. These men were “long identified with the larger business interests of Lewistown and all of them are recognized as people of prudence, progress, and sound judgement of all things pertaining to the best welfare of the community.”

Henry Hall Johnson and Company of Great Falls designed the State Bank, built in 1913. The Lewistown brick and terra cotta structure is typical in design and materials of the architecture of the period. 1913 was a year of tremendous growth in Lewistown and saw 100 residences and at least 12 large commercial buildings added to the community. The State Bank building remains a visible sign of the prosper and growth of the time. The Moose Lodge now owns and occupies this building. 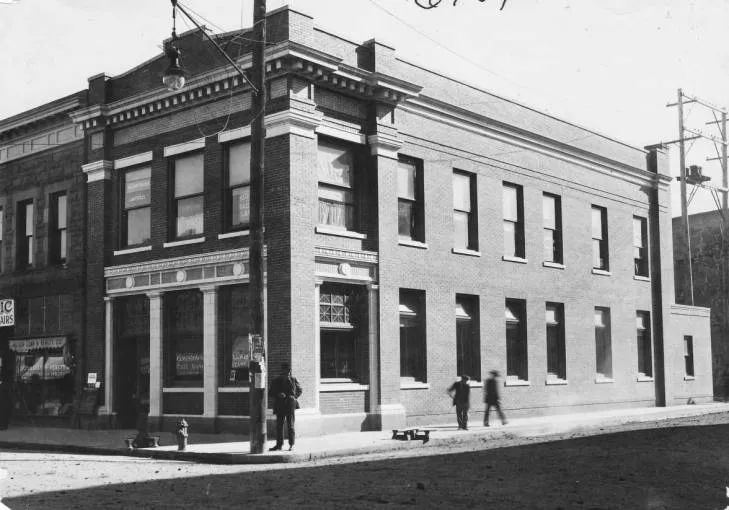 The First National Bank and the Montana Power Company, growing with the town, retained the services of the local firm of Wasmansdorff and Eastman to design the Bank-Electric Building. The four-story brick and terra cotta structure stands as a visible reminder of the development and prosperity of Lewistown in the early 1900s. 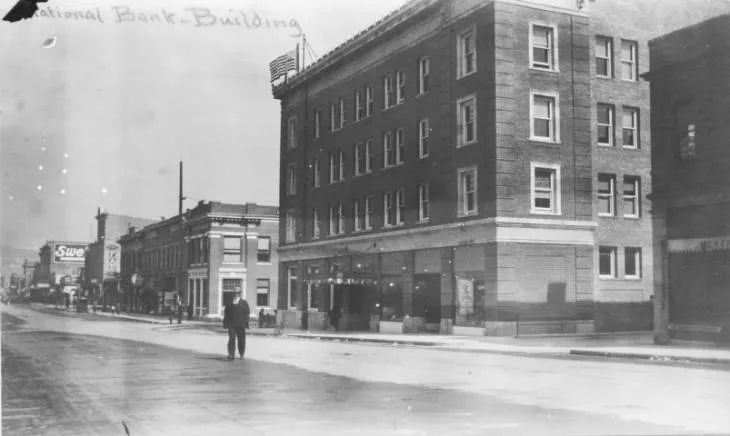 Built in 1899, Judith Basin Bank stands as one of the few pre-1900 brick structures on Main Street. The bank was reorganized at the end of its first decade, and the First National Bank became the “lusty off-spring” of the Judith Basin Bank. The First National Bank grew with the community, and in 1913 built a new facility, the Bank-Electric Block, directly across Main Street.

C.E. Shoemaker and Company, a farm loan organization, moved into the offices vacated by the bank. The company did an aggregate business of some $2,000,000 per year, a good indication of the land office business in Central Montana. 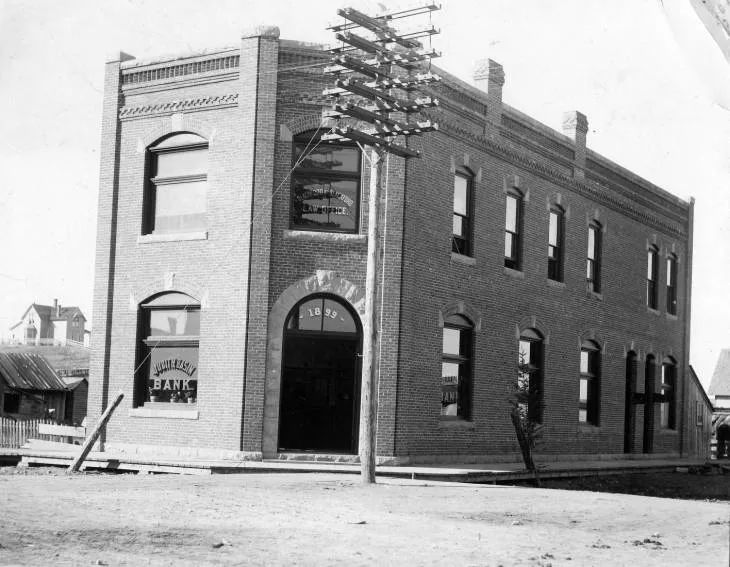 Bernard E. Stack, Hugh Shafer, and J.C. Huntoon organized the Fergus County Realty Company in 1910. They engaged the services of the local firm of Wasmansdorff and Eastman to design their new Lewistown Brick business block, which was constructed in 1914.

The Fergus County Realty building gave Lewistown residents a new Post Office, and “The Arrow,” an ice cream and confectionery parlor. The Post Office remained in the building until 1931, when the new Federal Building was completed. The building became Montgomery Wards and is currently home of the News-Argus. 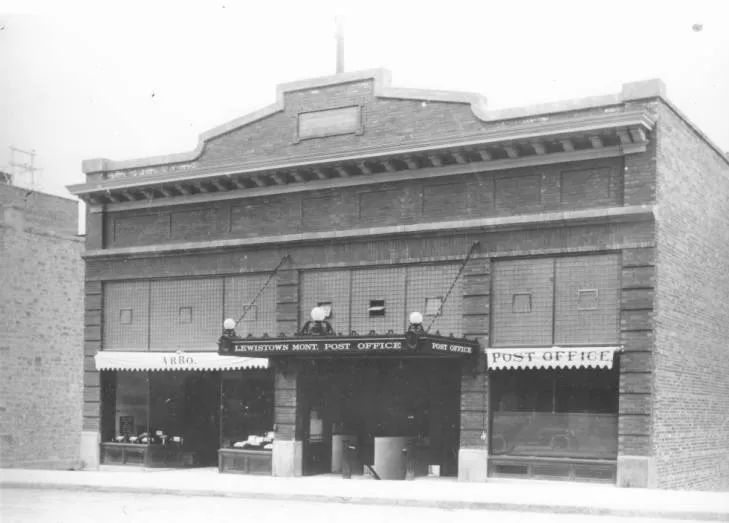 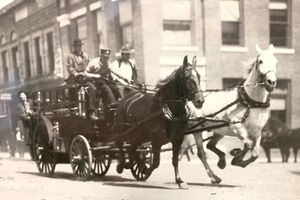 A Tour of Historic Lewistown

Take a tour through historic Lewistown. 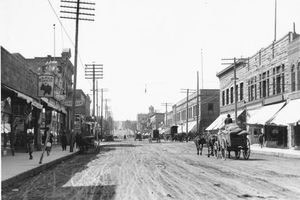 The information contained here comes from A Tour of Historic Lewistown, a brochure prepared by the Lewistown Historic Resources Commission. Material for this brochure was collected from architectural and historical inventories and National Register nominations forms. Photographs came from the City of Lewistown, the Lewistown Public Library, and the Montana Memory Project.

For information on these and other historic resources in Lewistown, contact the Historic Preservation Office located in the City Planning office, or call 406-535-1775.

The Lewistown Satellite Airfield was constructed in Lewistown, Montana, during World War II as one of four training facilities for B-17 Flying Fortress crew members and included a storage site for the top secret Norden Bombsight. The Norden Bombsight, a synchronous stabilized bomb-aiming device, was considered fundamental in America's precision bombing doctrine. The extant bombsight storage shelter which housed the bombsight is one of a few known buildings of this type remaining in the United States. With construction complete by 1942, Lewistown was built as a satellite field for Great Falls Air Base. Squadrons were trained in the navigation of the B-17 in addition to receiving gunnery and bombing practice. Once their training was complete, the men were sent to the European front. The airfield was in operation during a 12-month period between 1942 and 1943 and thereafter deactivated. 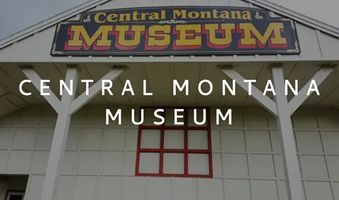 The area’s history is chronologically portrayed beginning in the 1870’s when the area was largely unsettled and buffalo roamed the open prairies. Our museum features many photos and displays portraying the changes that resulted as many settlers from all walks of life came to this area and filed on homesteads. Also on exhibit are a variety of collections (dolls, hats, wedding dresses, fire arms, forts, fossils, historic replicas and dioramas, Native American art and artifacts, medical equipment and photos from St. Joseph’s Hospital, military, photos, musical instruments, and many others) and displays with interpretation featuring some of the area’s most notorious characters. 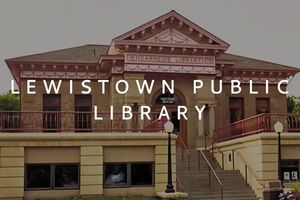 Built as a Carnegie Library in 1905, the Lewistown Public Library provides the most modern and up to date information access facility in the county. Located across from the Fergus County Courthouse on Main Street, the library has both the feeling of the old and the wonder of the new.